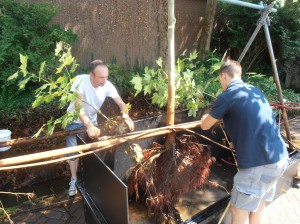 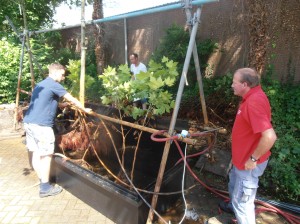 Today we had a great day at university, changing the installation 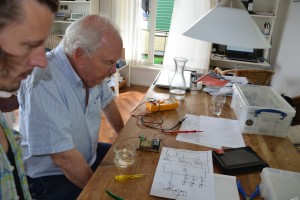 . We changed one part of the installation, making it pump water round, instead of loosing it into the ground. The water we use is anyway ground water. With the new installation, that is used for only part of the trees it is possible to add nutrients without loosing them into the ground.  Now we can compare the old and the new. For the new installation we had our in-house-pensionado Bernard build software and electronics. Everything worked it seemed! Thanks Bernard!
Also a little cliff hanger for next blog: we have seen some very, very strange things happen with the trees, pictures coming up soon….. 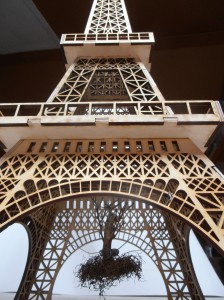 made the lasercut model of the Eiffel Tower months ago, I finally hung a ‘tree’ under it. The tree is a Bonzai tree, that I had not been able to keep alive.  In reality we do use an alive tree of course and it will (start) wear leaves.

The model is more or less in proportion. The tree will be abou 20% smaller in reality. 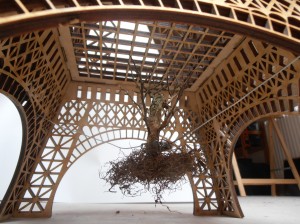 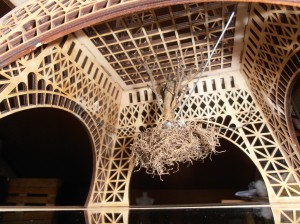 The structure of the branches and roots will probably be different but still it helps to get a sense of the space.

Darwinism, survival of the fittest, nature as a  competition. This view on nature has strongly influenced  our thinking. Also our political thinking,especially  Fascists liked to use the view of a ruthless nature as an  argument for ruthless measurements.

Trees also take part in a competition, especially the  struggle for light. Above the ground such is very obvious.  What is interesting, there seems to be increasing evidence  that under the ground things work entirely different. Trees  help other trees, especially family, as we can view in the attached  documentary.
A paradigm shift? Maybe. And if so, potentially one that  might shift our ideas on how to organize society as well.

Another interesting aspect of this documentary is the  relatively novel discovery on how trees and plants  communicate. A forest in this way becomes more of a  networked ecosystem that is in constant communication  through chemical signals. Almost a super-organism with  different trees and plants as it’s different organs. 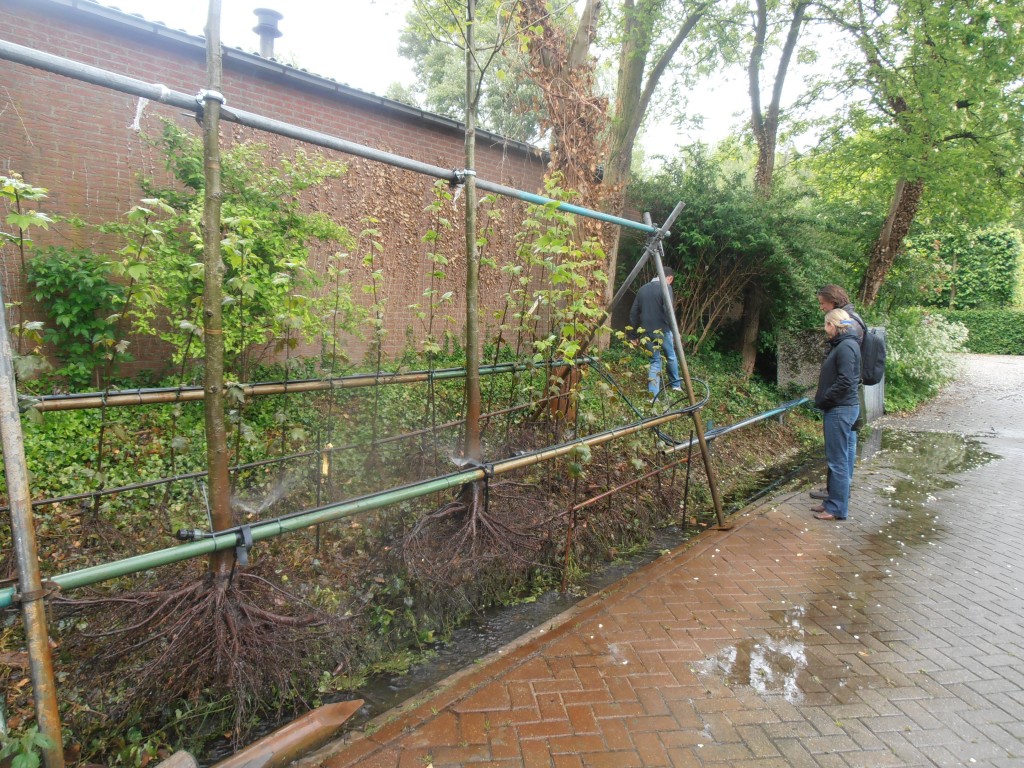 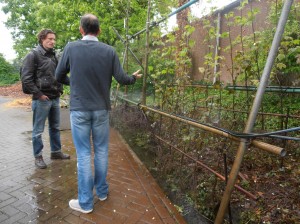 Today Susan, Wessel and I (Daan) visited the University of Applied Sciences Van Hall Larenstein to talk and to see how things are advancing. And we were surprised by a number of hanging trees and ‘branches’ (I don’t know the exact word)! The trees were already hanging for a week and seem to be doing fine. The species is sycamore. A species often used in urban landscaping. Supposedly quite resilient too.

The water is being sprayed 24/7 by a pump that takes water out of the ground and that is where the water goes back almost right away. There is a possibilty to add nutrients to the water, but they were not really set for that yet.

It was great to meet so much enthousiasm from the people at Van Hall/ Larenstein! Also great to see things are actually moving now! Trees are actually hanging! A little sens of pride and accomplishment.

In februari I went to the East Malling Research Centre. I found out that the year before they celebrated their 100 years universary with the exposition of a hanging tree.

It’s roots are beatifully untouched and hung with wires. Very long and thin roots. Although they did not keep the tree alive it was still worth a visit.  I learned they tried several excavation methods, including rinsing the earth of using water. Nothing really worked though, so they did it the ‘archeological’ way. They dus a circular trench aroung the tree and then moved inwards. Using brushes and precision tools it took them ten days with 12 people.  With my current knowledge I assume there a quicker ways, but quite an impressive work I would say! The people at EMR (Ross Newham received me) were very helpful and hospitable and showed me around the complex. They explained that most apple trees in the world come from their complex. It was fascinating to hear how apple trees are ‘made’. So what they do, they ‘fuse’ two different trees, grafting it’s called. A piece of branch with a root. The root is from a fast growing tree, the branch from a  certain kind of apple, like Jonagold. They combine the ‘best’ properties in this way. As a novice, I was completely surprised about the trees capacity to survive this and the compatibility with other species! The grafting also explains why all commercial apple trees have a giant scar at their base, it’s their from their childhood. Rather dramatically poetic, I hope the tree is ok about it. 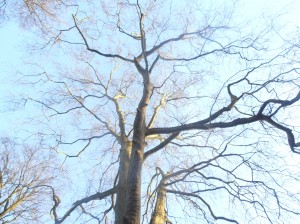